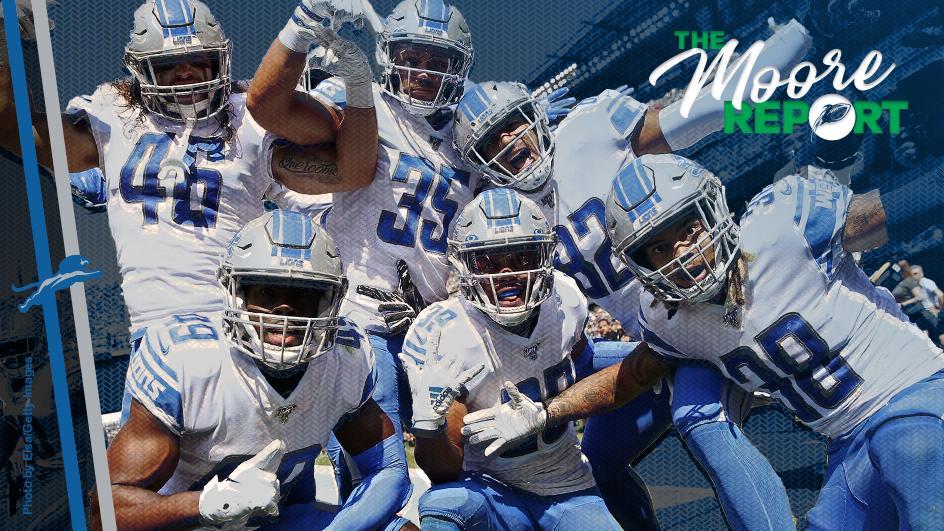 In this week’s edition of The Moore Report, we’re looking at Detroit’s 34-30 loss to the Kansas City Chiefs at Ford Field.

These close games are typically much harder to deal with than blowout losses. As a coach, player, or fan, being handed a lopsided loss is embarrassing, but it doesn’t hurt like yesterday’s game.

Now, looking back, I’m going to be honest. I don’t know that I’ve seen anything quite like yesterday’s 3rd quarter. Four consecutive fumbles and two game-changing reviews by the officials in less than 11 minutes? It was crazy.

First they took away the Kenny Golladay touchdown, which hurts to watch as a receiver. Slowing down game film can make a lot of catches look incomplete.

Did the man catch the football? I’m going to say yes.

Then the Chiefs get the ball back on the Matthew Stafford fumble the very next play, and momentum shifts. But Trey Flowers strips the ball five plays later and Detroit gets it back.

You can’t make this up.

Finally, Kerryon Johnson comes up short on a 1st-and-goal attempt at the 1-yard line. The play looks dead, but no whistle is blown, and the Chiefs pick up the ball and run it back. After a review, it’s called a touchdown.

So now the Lions are down 20-13 after they had the chance to take a 10-point lead on two separate occasions.

What I saw after that - and what Coach Patricia mentioned in his postgame press conference - was a team that didn’t let the calls get to them.

They kept playing, and took a 23-20 lead three drives later after a 53-yard field goal by Matt Prater, another Kansas City turnover, and a 9-yard touchdown from Stafford to Golladay (this one upheld).

They didn’t win the game, but they did perform well.

From a defensive perspective, Kansas City QB Patrick Mahomes didn’t complete a touchdown pass (he came into the game with 10 in three games) and the Lions secondary made plays without Darius Slay and Quandre Diggs, who left in the 1st half with a hamstring injury.

On the offensive side, the running game had a good day, averaging 5.3 yards per carry. Johnson finished with 125 yards on 26 carries and J.D. McKissic popped a 26-yard run.

Now let’s look at the game from the viewpoint of the players, the coaches, and the fans.

I’ve said in previous issues of The Moore Report that mistakes are easier to take when the end result is a win.

The opposite is also true.

Even though the team looked pretty good, it doesn’t matter to these players today. What matters is that they lost. Personal stats, great individual play, and improvement means nothing. There are no moral victories in the NFL.

They are glad to be entering the Bye to rest off some of these injuries, but it’s tough having a Bye after a loss. Now you have two weeks to think about the game.

With the Packers at Lambeau Field coming up, these players will no doubt be even hungrier to come out, prove themselves, and get a win in Week 6.

No coach is going to be happy with a loss, but Coach Patricia likes what he’s seeing out of his team. Players aren’t quitting when calls don’t go their way, and reserves are showing up when starters have been out due to injury.

Heading into the Bye, the coaches are glad their players will have an extra week of rest since they were already without Slay, Amendola, and Daniels, and then lost Diggs and T.J. Hockenson during the game.

Now the coaches will focus their attention on the Packers and - believe me - they want this game. It will be a big one in the NFC North standings, especially if the Packers lose at Dallas.

Everything I have seen from the fans on social media has been positive. They like the mental toughness of this team and feel they really showed up against Kansas City.

I’m sure fans will be watching next week’s NFC North match-ups - Green Bay at Dallas, Chicago at Oakland, and Minnesota at the Giants, because those games can make things interesting in the division.

How do you think the NFC North will look heading into Week 6? Let me know on Twitter @HMan84.